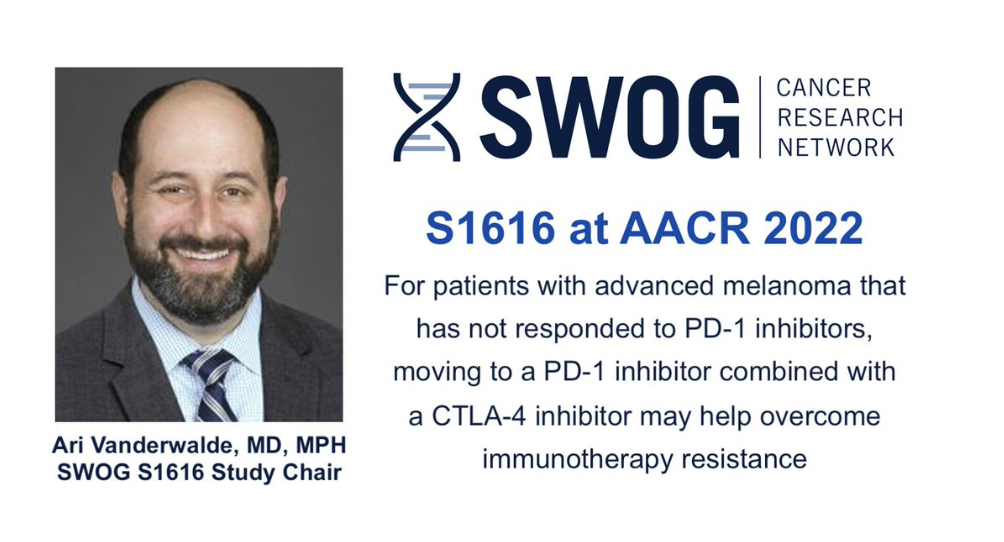 West Cancer Center & Research Institute’s Ari Vanderwalde, MD, MPH is a SWOG (a National Cancer Institute supported organization that conducts clinical trials in adults) investigator and study chair for a trial that addresses advanced melanoma patients who are resistant to PD-1 inhibitors. Over 40% of these patients don’t respond to PD-1 inhibitors, widely used immunotherapy drugs, and are often switched to  a CTLA-4 inhibitor.

Dr. Vanderwalde is presenting the findings at a plenary session of the American Association for Cancer Research (AACR) on Tuesday, April 12 in New Orleans. David Portnoy, MD  a medical oncologist at West is part of the study team along with distinguished Oncology specialists from other top Cancer programs in the country.

Patients with advanced melanoma whose cancer does not respond to treatment with widely used immunotherapy drugs known as PD-1 inhibitors are often switched to treatment with a second type of immunotherapy drug – a CTLA-4 inhibitor such as the drug ipilimumab. New results from a clinical trial by the SWOG Cancer Research Network, a group funded by the National Cancer Institute (NCI), show that these patients are more likely to benefit from ipilimumab when it is given in combination with the PD-1 inhibitor nivolumab than when given alone.

Patients in the study who got an ipilimumab and nivolumab combination had longer progression-free survival (PFS) time than patients who were treated with ipilimumab alone (six-month PFS estimates of 34 percent vs 13 percent). The overall rate of response to treatment was also greater on the combination arm (28 percent vs 9 percent).

Analysis of patient-derived biopsies also allowed researchers to test the hypothesis that primary anti-PD-1 resistance due to a lack of pre-existing T-cell infiltrate could be overcome by adding treatment with the anti-CTLA4 antibody ipilimumab.

The results are being presented Tuesday, April 12, at the clinical trials plenary session of the 2022 annual meeting of the American Association for Cancer Research (AACR) in New Orleans.

Ari Vanderwalde, MD, MPH, a SWOG investigator with the West Cancer Center and Research Institute in Germantown, Tennessee, was study chair for the trial and will present the work at the AACR meeting.

“We have known for more than seven years that patients receiving PD-1 inhibitor monotherapy do better than patients receiving ipilimumab alone in the front line setting,” Vanderwalde said. “But we still don’t know what the appropriate therapy is for patients without BRAF mutations in the second-line setting. This study answers the question of whether patients who progress on PD-1 agents can continue the PD-1 agent in combination with ipilimumab, or if they should be switched to ipilimumab altogether.”

The clinical trial, known as S1616, enrolled 92 patients with advanced melanoma who had been treated with anti-PD-1 or anti-PD-L1 immunotherapy drugs and had not received an anti-CTLA-4 drug. In all cases, the patients’ cancer had not responded to this therapy and had become worse or had spread, either while the patient was on this therapy or after the patient had stopped the therapy.

These patients were randomized in a 1:3 ratio to receive either

Side effects were consistent with what has been previously described for these agents.

“More than 50% of patients don’t achieve a response to PD-1 inhibitors in the front-line setting,” Vanderwalde said. “These primary refractory patients have had limited evidence-based options. SWOG S1616 should establish the combination of ipilimumab and nivolumab as the standard in patients who have progressed on first-line therapy that did not contain ipilimumab.”

Study S1616 is sponsored by the NCI, part of the National Institutes of Health (NIH), led by SWOG, and conducted by the NIH-funded National Clinical Trials Network (NCTN).

S1616 was funded by the NIH/NCI through grants CA180888, CA180819, CA180821, and CA180868, and in part by Stand Up To Cancer and the American Association for Cancer Research. Bristol Myers Squibb provided support to this study through a Cooperative Research and Development Agreement with NCI.

SWOG Cancer Research Network is part of the National Cancer Institute’s National Clinical Trials Network and the NCI Community Oncology Research Program and is part of the oldest and largest publicly funded cancer research network in the nation. SWOG has nearly 12,000 members in 47 states and nine foreign countries who design and conduct clinical trials to improve the lives of people with cancer. SWOG trials have led to the approval of 14 cancer drugs, changed more than 100 standards of cancer care, and saved more than 3 million years of human life. Learn more at swog.org, and follow us on Twitter at @SWOG