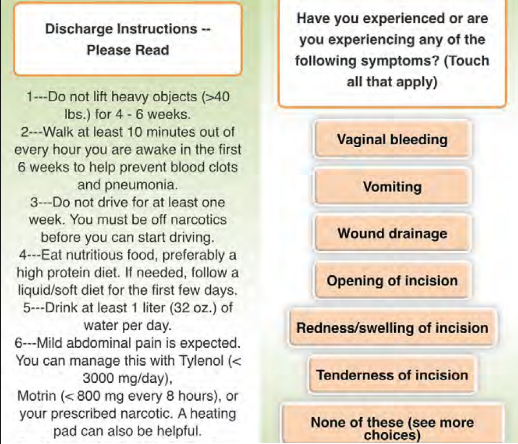 Nearly 1 in 5 women who undergoes ovarian cancer surgery is readmitted for complications, but a web-based app may improve patient monitoring so complications and adverse events can be addressed quickly by the patient’s care team. A feasibility trial to evaluate patient use of the Patient Care Monitor (PCM) app, which provides real-time symptom monitoring, was offered to patients from the West Cancer Center (WCC) in Memphis, Tennessee. Through the PCM app, which was downloaded to the patients’ smartphone, tablet, or other web-enabled device, patients were sent reminders about their discharge instructions and asked about potentially concerning symptoms (eg, fever, vaginal bleeding, swelling, pain). All symptoms reported from the app were integrated into the patient’s electronic health record.1

The investigators wanted to determine whether patients would be willing to use the app and whether they felt it improved their care. “We also wanted to know [whether] the app could be integrated into the clinical workflow,” said Ilana Graetz, PhD, assistant professor, Department of Preventive Medicine, University of Tennessee Health Science Center in Memphis. This was an important characteristic among oncology nurses, who expressed interest “especially if information the patient entered would automatically be entered into the patient’s electronic chart,” Graetz said.

Thirty-five women were assessed foreligibility, with 29 undergoing randomization to 2 arms: app+reminder (n = 14) and app only (n = 15). Those patients in the app+ reminder arm received daily email or text message reminders (based on participants’ preference at enrollment) during the first weekpost discharge, reminders every other day during the second week, and once per week in the third and fourth weeks post discharge. The investigators reported that participant age at enrollment ranged from 26 to 78 years, 70% were 50 years or older, and 21% were African American. Among participants, 44% had a 4-year college or higher education degree, and 35% reported incomes below 150% of the federal poverty level.

All participants completed 2 study questionnaires, one at baseline (before surgery) and one at follow-up (30 days after discharge). Quality of life was captured at baseline and follow-up using the SF-12, a 12-item instrument that provides summary composite scores for physical and mental health.
Figure. Sample Screenshot of App
Figure. Sample Screenshot of App After surgery, the patients were asked to click through 12 key discharge instructions based on the instructions given to all gynecological oncology surgery patients treated at the WCC upon discharge from the hospital. Participants were then asked about the following symptoms (which may be an early indicator of a potential complication): (1) fever; (2) vaginal bleeding; (3) vomiting; (4) wound drainage; (5) opening, redness, swelling, tenderness of incision; (6) shortness of breath; (7) chest pain; (8) swelling of one or both legs; (9) dizziness; (10) fast/irregular heartbeat; (11) change in appetite; (12) pain; or no symptoms to report (Figure). If participants reported any symptom, they then answered follow-up questions to help gauge the severity. Concerning symptoms triggered an alert, sent via email or text, to the patient’s WCC clinical care team. Graetz explained that the patients were encouraged to use the app immediately upon discharge because complications from surgery usually manifest early.

Participants said they found it beneficial to reporttheir symptoms via the app, knowing their postoperative condition was being monitored by someone on their oncology care team.

As expected, the investigators found that participants in the app+reminder group had more frequent app use relative to the app group (P = .05). Interestingly, using differencesin-differences (DID) analysis for quality of life, investigators found the app+reminder group had relative increase in the mental health score (DID = 7.51, P = .15) but decrease in the physical health score (DID = −7.49, P = .13).

“We asked about general quality-of-life measures to determine a trend on potential benefit. We were a little surprised that physical health decreased for patients using the app but mental health increased. We thought both [aspects] would increase,” said Graetz. She suggested that when patients answered questions about their physical symptoms, they were more conscious about them as a result. “When we asked the patients about their symptoms after the trial ended, the patients who used the app had better recall about the symptoms and could remember the painful days,” said Graetz