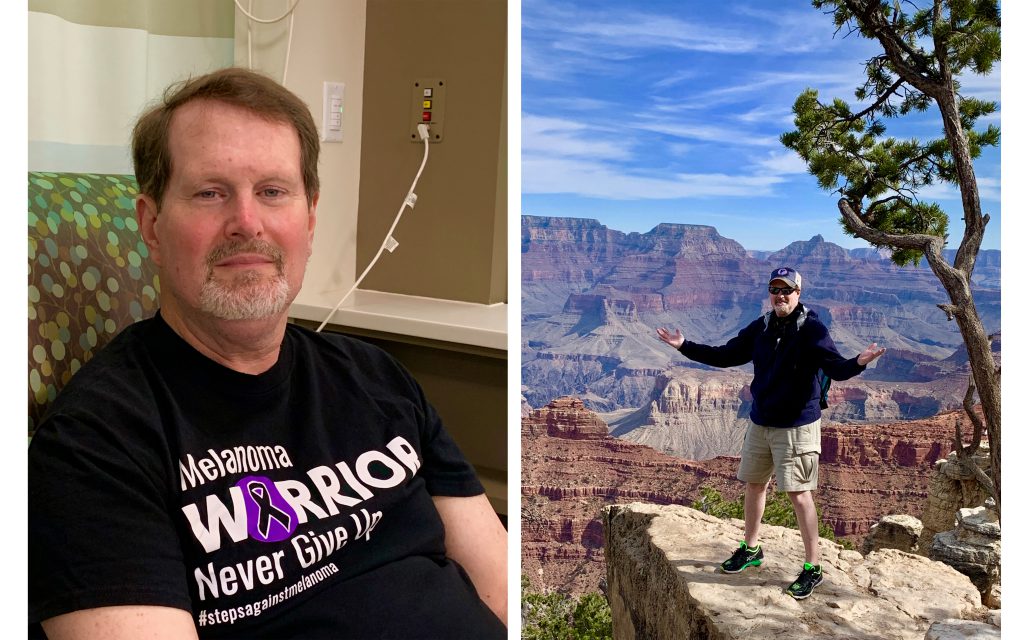 Meet Ken, a West Cancer Center metastatic melanoma survivor. Ken recently shared his Cancer Survivorship Story with us as we hope to spread these journeys of hope, achievement and encouragement this month!

“My personal journey with #melanoma began long before my first #skincancer diagnosis.

I grew up near the Gulf Coast beaches of Florida in the 1960s and 1970s. A time when sun protection consisted of a floppy hat, a white t-shirt, and suntan lotion. Several trips to the beach ended with red, raw shoulders and a burned nose. I have light-brown hair, blue eyes, and a seemingly infinite number of freckles, moles, and skin blemishes. This placed me in the high-risk category for skin cancer. Several years ago, a dermatologist told me that with my skin type, I should have grown up in Minnesota, not in Florida.

In the 1980s and early 90s, I continued to abuse my skin. Like many young people in those days, I worshipped the sun and spent too many weekends out by the pool baking in the early afternoon heat. I never used enough sunscreen and, when I did use it, I certainly never thought about re-application. In addition, I fell into the trap of occasionally using tanning beds to get a base tan. In the mid-1990s, I decided to have a mole on my right shoulder checked out. A biopsy revealed that I had melanoma in situ. That decision in 1995 probably saved my life. It also started the next phase of my journey. From 1995 to today, I’ve had 10 melanomas – ranging from in situ to Stages I and II – diagnosed and removed. I also had a basal cell carcinoma removed from my upper left cheek. (You can still see the small divot in my face.) For the next ten or so years, I routinely visited dermatologists and general surgeons. I took precautions – putting on sunscreen and wearing a hat – but by then the damage to my skin was done.

A major twist in my journey occurred in 2011 when a previously biopsied lesion tested malignant, and I underwent immediate surgery to remove a Stage IIC tumor along with a tennis ball-sized area of surrounding tissue from my upper back. The surgery included an extensive skin graft and the removal of several sentinel lymph nodes from my neck (which, thankfully, were clear). I was in physical therapy for 6 months, and I still have stiffness in my back and limited range of motion.

Years later, the hole in my back – as I call it – is very ugly and the scar tissue still tender. As my plastic surgeon once joked, I wasn’t going shirtless to the beach any longer.

On July 24th, 2013, another major turn in my journey happened when a PET scan revealed that melanoma had spread to my lungs. The likely source of the metastases was the malignant tumor removed in 2011. My oncologist, Dr. Schwartzberg, believed that a tiny bit of melanoma escaped from the primary site via my bloodstream. I was told that if the cancer didn’t respond to treatment that I would likely die in 9 to 12 months.

Naturally, I was in shock as I left the West Center that day. It was completely surreal. Even with a metastatic melanoma diagnosis, however, I was fortunate. Following my 2011 surgery, protocol dictated that I would be scanned every three to six months for the rest of my life.

So, I now have a permanent oncology team along with new dermatologists who understand my circumstances and are diligent in their skin exams. Anything in question is immediately biopsied. Yet another twist in my journey was based on simple genetics. My metastatic melanoma is somewhat atypical. Following the 2013 diagnosis, two separate labs confirmed that my cancer had a c-Kit mutation—found in less than 7 percent of all melanoma patients. This rare mutation, however, responds well to a specific oral chemotherapy drug. Once I began taking the drug, some of my tumors actually shrank. For the next seven years, my tumors remained relatively small and stable. I was tolerating the chemotherapy drug with minimal side effects. In June 2020, a routine CT scan showed a mass around my right adrenal gland. A biopsy revealed that my melanoma had spread, once again. We made the decision to start a new treatment regimen—immunotherapy. So far, the new treatment regimen has kept my cancer in-check.”