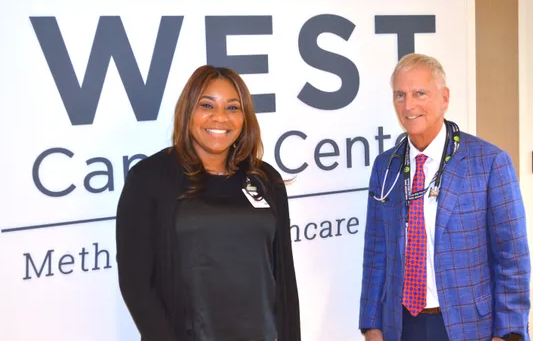 Lucky that, after not bothering to get a mammogram since 2011, I didn’t discover a tumor that had spread to other parts of my body.

“After four years of not being screened, that is a blessing,” said Keesha Green, community outcomes and relations coordinator at West Cancer Clinic.

Dr. Kurt Tauer, medical oncology chief of staff at West, said while I might not have necessarily discovered my tumor earlier, since Stage 1 tumors usually don’t appear on a mammogram until they are 12 to 18 months old, my luck lied in the fact that I decided to resume my screenings when I did.

“I think the Lord intervened,” he said.

But no woman should leave it to luck or the Lord when it comes to getting a yearly mammogram.

That’s especially true for African-American women here in Memphis, where a 2014 study by the Sinai Urban Health Institute and the Avon Foundation for Women found that between 2005 and 2009, Memphis had the highest disparity in breast cancer deaths for black women among 40 cities.

But Memphis has since narrowed that gap, Green said. It now ranks seventh when it comes to those disparities.

Much of that improvement comes from efforts by Tauer, who wasn’t pleased with Memphis leading in breast cancer disparities. He now leads West’s Community Outreach Initiatives, so that lack of insurance, transportation or other issues don’t prevent women from receiving mammograms or other care.

“I felt embarrassed, I felt terrible, I felt we let our city down,” Tauer said. “So, we really wanted to do something to make sure that every woman gets care.”